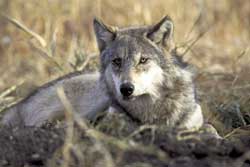 Some good news for wolves and the Frank Church-River of No Return Wilderness (FC-RONRW) in Idaho: In August 2015, Idaho Fish and Game (IDFG) decided not to hire a hunter to kill wolves in the Wilderness in winter 2015-16. More information follows in the press release below, but some background first:

As anticipated, in December 2013 IDFG hired a professional trapper to wipe-out as many packs as possible in the Wilderness. The Forest Service (FS) went along, allowing the trapper to use FS facilities to aid his efforts.

Wilderness Watch, along with other conservation groups and Idaho wildlife advocate Ralph Maughan, asked a federal judge in Idaho to stop this IDFG program (which had the support of the FS) to exterminate wolves deep within the FC-RONRW. Earthjustice represented WW and the other plaintiffs. Faced with a looming deadline to defend its actions before a federal appeals court, IDFG announced on January 27, 2014 that it was halting its wolf extermination program in the Middle Fork region of the FC-RONR. (This was after the hunter/trapper had killed nine wolves.) In order to get out from under the lawsuit, IDFG agreed to not kill any wolves during the 2014-15 winter and to notify the FS of its plans for the 2015-16 winter by July 31, 2015, at which time the FS would have to concur or object to the plan.

Wilderness Watch was extremely pleased that wolves got a reprieve during the 2015-16 winter, but we remain vigilant, knowing the State's objective remains to kill 60 percent of the wolves living in the area and it is likely to just try another way to do it.

For now, let’s celebrate for the wolves!