The Most Serious Attack on America's Wilderness

GOP-backed bill is most serious attack on America's Wilderness Act in history
The Wilderness Act has protected America's wild lands for 50 years. It is now under threat by a House bill deceptively called The Sportsmen's Heritage Act. Citizens must demand the US Senate do nothing to advance its devastating provisions.

Conservationists and wilderness enthusiasts across America are mobilizing to defeat a bill passed by the House of Representatives in April that would eviscerate the 1964 Wilderness Act.

Deceptively entitled the Sportsmen's Heritage Act, the bill (H.R. 4089) purports to protect hunting, fishing, and recreational shooting. The bill is being pushed by powerful groups like the National Rifle Association and Safari Club International and supported by some of the most anti-wilderness Republicans in Congress. And it would effectively gut the Wilderness Act and protections for every wilderness in America's 110-million-acre National Wilderness Preservation System – everywhere from the Boundary Waters Canoe Area Wilderness in Minnesota to the Selway-Bitterroot Wilderness along the Montana-Idaho border that I can see from my home.

The House bill's provisions could still become law during the current lame-duck session of Congress. Though the Senate is considering a different sportsmen's bill that does not include the harmful elements, the Senate bill could eventually be merged with the devastating House bill in order to pass both chambers.

The Wilderness Act eloquently defines wilderness as "an area where the earth and its community of life are untrammeled by man, where man himself is a visitor who does not remain." The statute further designates wilderness as an area that retains "its primeval character and influence, without permanent improvements or human habitation" and is "protected and managed so as to preserve its natural conditions."

I know the Wilderness Act. I worked alongside my mentor, Howard Zahniser of the Wilderness Society (the bill's chief author and proponent), from 1956-1964 to gain its passage by Congress. After Zahniser's untimely passing in 1964, I directed the Wilderness Society for the next 12 years in implementing the new law and in adding new areas to the National Wilderness Preservation System. Congress responded to requests from the American people by adding tens of millions of acres to the wilderness system. Today, that system has grown from the original 9 million acres in 1964 to nearly 110 million acres. The Wilderness Act provides the best and most protective standards of all types of federal public land protection.

But this great legacy of American Wilderness is essentially destroyed by H.R. 4089 in several key ways.

First, H.R. 4089 elevates hunting, fishing, shooting, and wildlife management above wilderness protection within designated wilderness areas. Visitors or wildlife managers could drive motor vehicles and build roads, cabins, dams, hunting blinds, aircraft landing strips, and much more in wildernesses if any of these activities could be rationalized as facilitating opportunities for hunting, fishing, shooting, or managing fish and wildlife.

The only limitation in H.R. 4089 on motor vehicles or development is that the activity must be related to hunting, fishing, shooting, or wildlife management, though that need not be its only or even primary use. In reality, almost any recreational or management activity could be shoehorned into one of these exceptions and thereby exempted from Wilderness Act safeguards.

Perhaps even more troubling, H.R. 4089 would waive protections imposed by the Wilderness Act for anything undertaken in the name of wildlife management or for providing recreational opportunities related to wildlife. This would allow endless manipulations of wildlife and habitat.

This could include logging, if done to stimulate new forest growth on which deer might graze. Similarly, bulldozing new dams and reservoirs could be validated as a way to enhance fishing habitats. Poisoning lakes and streams to kill native fish and then planting exotic fish might be allowed under the guise of increasing fishing opportunities. And predator control (including aerial gunning and poisoning) could be defended for boosting the numbers of popular hunted species like elk or bighorn sheep that predators also eat.

There is no limit to what managers could do in designated wilderness areas all in the name of wildlife management or providing opportunities for recreational hunting, fishing, and shooting. These provisions strike at the heart of the Wilderness Act and its foundational underpinnings to preserve wilderness untrammeled and native wildlife in its natural environment.

Sportsmen and sportswomen – those who hunt and fish – were, and continue to be among the strongest supporters of the original wilderness law, of designating wilderness lands, and of the special quality of fishing and hunting experiences that wild and undeveloped lands provide. Many of these folks are fighting to prevent eviscerating the law and its wilderness preservation safeguards.

For nearly a half-century, the Wilderness Act has protected the finest of America's wild lands and created a National Wilderness Preservation System that is the envy of much of the world. H.R. 4089 would negate all that we have preserved. In my 60 years of work for wilderness preservation and management, our nation has never been threatened by a more serious attack on this irreplaceable publicly owned resource. Citizens must demand that the US Senate do nothing to advance the House provisions of the so-called Sportsmen's Heritage Act and instead protect our grand wilderness legacy for future generations.

Wilderness icon Stewart Brandborg worked hand-in-hand with wilderness bill-author Howard Zahniser in the late-50s/early-60s to get the Wilderness Act passed and is the only person living today who worked day-to-day on the bill. After Zahniser's untimely death in 1964, Brandy took over as executive director of the Wilderness Society until 1976. He remains very active in Wilderness and public lands issues, is a long-time Wilderness Watch board member and now serves as a senior advisor. He is an incredible inspiration to all.
Tags:
Wilderness Act legislation H.R. 4089 Congress
Tweet
Continue reading

The Surgeon’s Strike Against the Wilderness Act

An undercurrent of hostility toward wilderness boiled over in the U.S. House of Representatives when members passed H.R. 4089, the so-called Sportsmen’s Heritage Act, on April 17. The vote was a slam-dunk, 274 to 176, with 39 Democrats joining 235 Republicans to support a bill that green groups, big and small, agree will eviscerate the Wilderness Act.

My colleagues George Nickas and Kevin Proescholdt have written a thorough analysis on how H.R. 4089 would effectively repeal the Wilderness Act. Others have written about how the law undermines other public lands protections.

Now the fight moves to the Senate, where the bill arises as S. 2066 sponsored by Lisa Murkowski of Alaska and a Farm Bill amendment by Jim Risch of Idaho. It’s important to contact your Senators to oppose both bills. Most effective is an email or a letter in your own words. Here is our alert with background information. Please also sign Wilderness Watch’s petition, which is well on its way to 10,000 signatures.

What’s going on here is sad and astonishing. We’re seeing the end of a 50-year consensus that brought into being our environmental infrastructure, the laws, agencies, and regulations that have kept the air and water clean, moved the national forests away from unsustainable harvests, given citizens a voice in natural resources decisions, and created the ultimate benchmark, a Wilderness system loaded with 110 million acres of unparalleled landscapes we hope to leave as a legacy to our progeny.

H.R. 4089 demonstrates how vulnerable Wilderness has become to the whims of the radical fringe within the Beltway increasingly willing to sabotage Wilderness by burying revisionist language in otherwise unrelated legislation.

Let’s take a closer look at how Wilderness Act repeal language found its way into a bill supposedly concerned with hunting and fishing issues.

The chairman of the House Natural Resources Committee, Doc Hastings, a Pasco, Washington Republican, stitched together H.R. 4089 from a handful of separate bills sponsored by grandstanding GOP congressmen and a congresswoman reacting against the possibility that federal agencies or the President might do things they objected to:

Benishek’s bill also contained surgical strikes against the Wilderness Act. Indeed, all the banter about hunting and fishing access was really a Trojan Horse obscuring the real intent behind the law―a thinly veiled attempt to gut the Wilderness Act pushed strongly by the NRA and Safari Club. Hastings adopted the language unchanged into H.R. 4089, and, without much fanfare, the bill passed the House.

With few exceptions, the Wilderness Act prohibits the use of motor vehicles, aircraft, motorboats, other mechanized transport, motorized equipment, and the building of temporary roads, structures or installations. Benishek’s language in H.R. 4089 does away with these restrictions if a person is hunting, fishing, or recreational shooting. In other words, if you’re carrying a gun or fishing rod under Banishek’s provisions, you can drive your ATV or other motorized vehicle into any designated Wilderness. Similarly, an endless array of manipulations and trammeling would be allowed by the House bill: construction of roads, dams, hunting cabins, and much more would be allowed if they could be justified as aiding recreational hunting, fishing, or shooting.

H.R. 4089 hijacks the Wilderness Act’s prime directive. Federal agencies are supposed to measure their decisions by whether they contribute to maintaining the wilderness character of the areas they manage. Banishek’s language would shift wilderness managers’ focus to promoting easier access for hunting, fishing and shooting recreation and to managing wilderness as game farms, where managers could employ virtually any measure to modify natural conditions in order to increase game numbers.

“These [Banishek] provisions strike at the heart of the Wilderness Act and its foundational underpinnings to preserve an untrammeled Wilderness,” Nickas and Proescholdt write in Wilderness Watch’s analysis. The bill “would allow any sort of wildlife habitat manipulation that managers desire to do . . . logging, chaining, roller-chopping, or bulldozing forests and other vegetation to create more forage for deer, elk, or other game species.”

The Congressional Research Service points out that H.R. 4089 would also bar the application of NEPA, meaning an agency could cite H.R. 4089 to weaken wilderness protections and not do the environmental analysis required by NEPA. Citizens’ comments would no longer be welcome if the Senate passes this bill unchanged and the President signs it.

Early in the floor debate, Congressman Hastings stressed that the bill was nothing to worry about, just “an affirmative declaration that Americans’ ability to fish and hunt is not arbitrarily subject to limitations by the whim of federal bureaucrats.” But, by the end of the debate it was clear Congressman Hastings understood precisely the ramifications of Banishek’s wilderness language.

We know this because New Mexico Congressman Martin Heinrich offered an amendment that would have made clear that nothing in H.R. 4089 could be construed “to allow oil and gas development, mining, logging or motorized activity on Federal public land designated or managed as wilderness.” Hastings led the fight to not only defeat the amendment but to insert his own amendment saying the bill’s provisions “are not intended to authorize or facilitate” these destructive uses.

That’s the amnesia defense, like saying you didn’t intentionally rob a bank after you just walked out with all the money. In other words, Hastings understood and approved this stealth attack to eviscerate the Wilderness Act, and Wilderness Watch will do everything we can to stop the bill from becoming law. 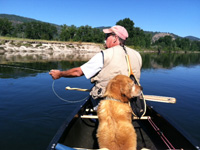