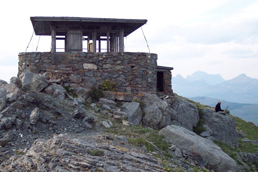 Heavens Peak Lookout in Glacier National ParkGlacier National Park recently decided to move forward with its plan to stabilize the non-operational Heavens Peak Lookout, within recommended wilderness, despite the objections of Wilderness Watch, two retired Glacier NP rangers, and the majority of those who commented on the environmental assessment. The project includes the use of a helicopter (up to 12 flights) and a generator. Wilderness Watch objected to the plan based on its disregard for the Wilderness Act (which prohibits structures and the use of motorized vehicles/mechanized equipment in Wilderness) and Park Service policy (which requires recommended wilderness to be managed as Wilderness).

A local newspaper article stated that opposition to the project was based on, "the belief (emphasis added) that preservation of cultural resources and the use of helicopters are not permitted by the Wilderness Act," when in fact, opposition was based on NPS wilderness policy and federal law. A Wilderness Watch member and former Glacier National Park biologist responded to the article with this excellent Op Ed:

The Inter Lake article “Glacier Park lookout restoration gets green light” (9 June) did not accurately describe the reasons for broad opposition to this project. The article stated: “most opposed it based on the belief that preservation of cultural resources and the use of helicopters are not permitted by the Wilderness Act.”  It is not a question of “belief.” At issue is the accurate interpretation of the letter and intent of the Wilderness Act. Glacier National Park already has proposed this lookout area for inclusion in legal Wilderness. Although a Civilian Public Service crew built the lookout, they simply provided the labor. Put a plaque in a visitor center acknowledging the crew.  But are the crumbling ruins of the Heavens Peak Lookout, built in 1945 and used for only a few years, a cultural resource of such significance that it trumps the values of Wilderness? The Wilderness Act does not permit unnecessary agency use of a helicopter; can helicopter use be justified for this project as if it were essential, e.g., has the same importance as a rescue mission? The decision to approve the project is based on elevating a minor cultural resource to importance it does not warrant and cavalierly dismissing impacts to wilderness values.

This confusing duplicity is nothing new. The National Park Service (NPS) did not support the inclusion of national parks in the Wilderness System when the Act was signed in 1964 and the agency has never demonstrated a commitment to the Act. NPS Historian Richard Sellers has written: “Although many of the National Park Service’s rank and file enthusiastically supported the wilderness bill, the bureau’s leadership seems to have drifted from outright opposition to reluctant neutrality.” The NPS has made this shift by conveniently writing inordinate flexibility into its management standards.

Eight years after passage of the Wilderness Act, the NPS advocated Wilderness classification for Glacier. However, Director Hartzog and Glacier Superintendent Briggle wanted the proposal to include an aerial tram or gondola route from the Many Glacier Hotel to Grinnell Glacier, and new “wilderness” chalets within 100-acre enclaves at Cosley Lake, Debris Creek, Fifty Mountain, and the head of Kintla Lake. Public opposition sunk these schemes.

The NPS proclaims that helicopter flights, a generator, and other activities associated with the lookout reconstruction will have “No Significant Impact” on the environment or on wilderness characteristics. This conclusion is not supported by the facts.  A careful reading of the Environmental Assessment (EA) reveals that short shrift is given to impacts on visitor experiences, natural quiet, natural landscapes, and wildlife. Even when the reconstruction work has been completed, insults will continue with periodic helicopter flights for maintenance. There is no plan to actually “use” the rebuilt lookout. Rather than the old structure continuing to gradually disintegrate, the restored lookout will serve as a permanent blemish on the ridge skyline.

According to the EA, the NPS does not plan to reconstruct the trail to the lookout because it is within the area of highest density of grizzly bears in the Northern Continental Divide Ecosystem. Yet we are told that construction workers will bushwhack from Packers Roost to a construction camp. Inevitably, hikers will bushwhack their way to see this intrusive monument. Is this responsible management of prime grizzly habitat?  The route from the planned camp to the Lookout is up a steep talus slope, where the trail will have to be reconstructed to avoid multiple erosion scars. Current NPS wilderness management policy (available on the internet) stresses the importance of determining whether a proposed project has an adverse impact on the preservation of natural conditions including the lack of man-made noises, the assurance of outstanding opportunities for solitude, and the assurance that wilderness will be preserved and used in an unimpaired condition. The basic policy is clear and the Heavens Peak Project does not meet the policy’s criteria for approval. However, the NPS relies on policy exceptions that apparently allow a superintendent to conjure up justifications for antithetical projects such as Heavens Peak.

Wilderness qualities, and the opportunity for visitors to appreciate and enjoy wilderness, depend on the standards by which an area is managed, not simply on naming an area “Wilderness,” as Superintendent Cartwright advocates.