In a bold move that will protect nearly all of the magnificent Arctic National Wildlife Refuge in Alaska, The Fish and Wildlife Service (FWS) is recommending full wilderness protection for more than 12 million Refuge acres, including the Coastal Plain.

In late January, the FWS released its final Comprehensive Conservation Plan (CCP), which will guide stewardship of this iconic wilderness for the next 15 years or more. The FWS chose Alternative E, which Wilderness Watch has been supporting, as its preferred alternative. Alternative E recommends the following Wilderness Study Areas for protection as designated Wilderness: the Brooks Range, the Porcupine Plateau, and the Coastal Plain. The Obama administration is backing FWS’s decision to protect the Arctic, and is urging Congress to designate these 12 million acres as Wilderness.

Meanwhile, groups like Alaska Wilderness League, Defenders of Wildlife, and PEW have been advocating for the designation of only the Coastal Plain as Wilderness (1.4 million acres). Additionally, the FWS is also recommending the Atigun, Hulahula, Kongakut, and Marsh Fork Canning Rivers for inclusion into the National Wild and Scenic Rivers System. 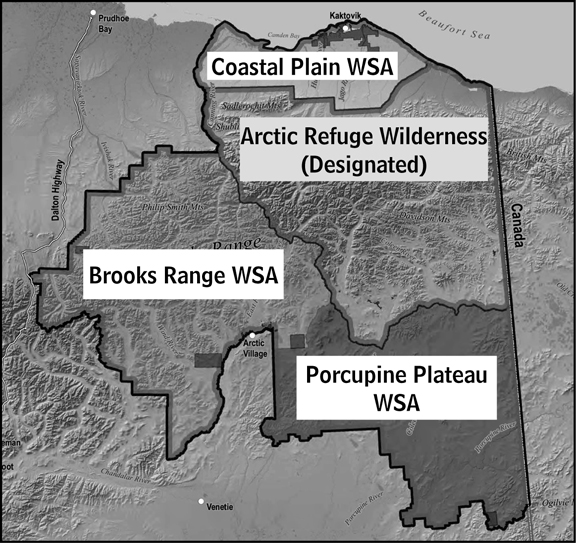 The Fish and Wildlife Service has released a draft environmental impact statement for revising the Arctic Refuge Comprehensive Conservation Plan (CCP). The final plan will guide stewardship of this iconic, magnificent wilderness for the next 15 years or more. A strong record of public support for preserving the exemplary wilderness character of Arctic Refuge is needed.

The Arctic National Wildlife Refuge is our "Geography of Hope," unmatched in its vast scale, remoteness, ecological integrity, and wilderness character. The Refuge is 19 million acres of America’s premier wildlands. In 1980, Congress designated 8 million acres as Wilderness. The CCP should recommend designating the remaining 11 million acres as Wilderness. But because wilderness designation alone does not guarantee protection of the Arctic’s special values, and since only Congress may designate additional wilderness, the standards set in the CCP for managing both the designated and potential Wilderness will determine whether these incomparable wildlands remain wild and pristine for years to come.

The Refuge should set the benchmark for appropriate stewardship of our entire National Wilderness Preservation System. Now, more than ever, the Arctic Refuge needs your help to become what its founders envisioned.


The Alaska Chapter of Wilderness Watch has assembled the collective knowledge of veteran Arctic Refuge activists and former agency stewards to identify detailed issues that must be addressed in an effective plan.