Seeing What All the Dam Fuss Is About

By Jerome Walker and Marcia Williams

After reading "A Dam Dilemma" in the Missoula Independent in mid-July, we decided to hike up to the Fred Burr Dam in the Selway-Bitterroot Wilderness in Montana to see what all the fuss was about. One of us is 74 years old and the other is from New York, had only camped once and had never backpacked, but we were powerfully curious.

The first night we packed in to a campsite 7.5 miles up Fred Burr Creek. That day we saw two other backpackers, but the next two days we saw no human being and enjoyed the quiet found only in Wilderness. By lunchtime of the second day we were at the dam. 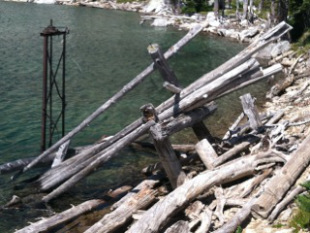 The catwalk was constructed from nearby trees and not from sawmill boards.We noticed straight off that the partly collapsed catwalk that the private company, Fred Burr High Lake Inc., wants to repair by using a helicopter to bring in 682 pounds of boards, etc., was constructed from on-site trees, not from sawn lumber. The dam itself, which doesn't need repairs, was also constructed from on-site material. We wondered why the catwalk couldn't just be repaired using local materials again, as there were plenty of trees and deadfall around. There was a spillway to take care of any overflow, so a federal judge’s recent assertion that "leaving Fred Burr Dam unrepaired could do more damage to the Wilderness than a single helicopter" didn't make much sense either. (Federal Judge Donald Molloy recently ruled the Forest Service could authorize the private company to use a helicopter to transport materials for this minor repair to the dam.)

Hiking up to the dam we crawled over or ducked under some deadfall, but these need only to be cut with crosscut saws as a matter of routine trail maintenance for both horses and people to pass easily. At no point did we see switchbacks that would have been impossible for horses to negotiate, as the Forest Service maintains, and for sure there seemed no need for dynamite to "widen the trail", as they also claim. We also observed manure (view a video of the where the manure was seen by clicking here) all along the trail up very close to the dam itself, so clearly some horses were able to make it up there fairly recently, as we figured nobody would helicopter in manure. 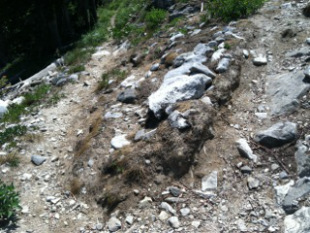 This is the sharpest switchback we saw, which could be easily negotiated by a horse without any blasting with dynamite, as the Forest Service alleges would be necessary. In fact, very near this spot we found horse manure on the trail.Later we read Renee Morley's letter to the Independent in which Morley agreed, as just about everybody does, that "unnecessary helicopter flights are detrimental to Wilderness and degrade the law". Then Morley reversed course and let the Forest Service off the hook due to their lack of funds to maintain trails so that horses can pass.

Still later we learned that the Forest Service had spent tens of thousands of taxpayer dollars on an Environmental Assessment required by Fred Burr High Lake, Inc's 2010 request for use of a helicopter in Wilderness.  This expenditure wouldn't have been necessary had the Forest Service simply insisted in the first place that the corporation, which owns the dam and water rights, obey the Wilderness Act. This would require either packing in repair materials or using on-site materials, as had been done in the past. More importantly, it raises the serious question of why the agency is spending taxpayers' money to analyze a private company's project on its private dam?

Now the Forest Service has to spend more of our taxpayer money to defend against litigation brought against them for failing to uphold the law. Since these funds, which Congress appropriates to the agency to manage Wilderness, are being wasted, maybe that's why there's not enough money left to hire crews to maintain the hiking trails in Wilderness or to build new trails, which was not the case in the past.

The Wilderness Act of 1964 (we will celebrate its 50th anniversary next year) is very clear about prohibiting ANY motorized equipment such as helicopters in Wilderness whatsoever except for rare life and death rescue situations and in rare cases where such use is necessary as the minimum requirement for proper protection and administration of the area as Wilderness. This principle is fundamental to the very concept of Wilderness. Maybe the Forest Service needs to take another look at the law and spend our taxpayer money more wisely. That could go a long way towards untangling the so-called "dam dilemmas" throughout Wilderness.

Jerome Walker's introduction to Wilderness Watch and Wilderness began when his late wife, Melissa served 10 years on WW's board, including a term as vice president. A retired neurologist, Jerome has concentrated on wilderness photography for the last two decades. His images can be seen on his website (jeromewalkerphotography.com).

Marcia Williams, who is new to Wilderness but learning fast, is from New York and currently lives in Franklin, TN, where she founded and heads up Independent Trust Company.  Because of her background in finance and investment she currently is serving on Wilderness Watch’s finance committee.