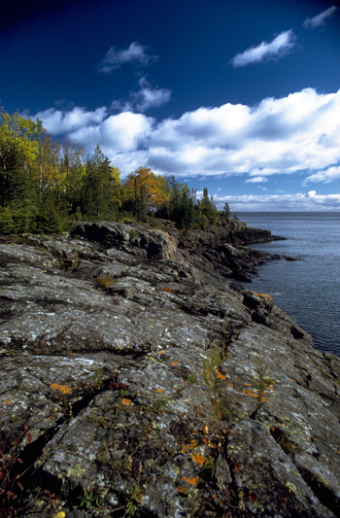 Pressure has been mounting on the National Park Service to “save” the wolves on Michigan’s Isle Royale National Park and Wilderness.  Wolf numbers on the Lake Superior island have dropped, proponents of manipulation proclaim, and the decades of in-breeding have flattened the population’s genetic diversity.  We should transplant wolves from the mainland to insure that the wolf population survives, they assert, and to provide a “genetic rescue” to freshen up the wolves’ gene pool, much as zookeepers do with certain captive animals.

I was invited to be one of four panelists at a well-attended forum on this issue held at the University of Minnesota in Minneapolis this past June, sponsored by the Sigurd Olson Environmental Institute and the National Parks Conservation Association.  The other three panelists were long-time wolf biologist Dr. Dave Mech; Dr. Tim Cochrane, Superintendent of Grand Portage National Monument and an Isle Royale historian; and Dr. Rolf Peterson, the current lead wolf researcher on Isle Royale.  Isle Royale Park Superintendent Phyllis Green also participated in the forum, though not as one of the four panelists.  Of the four of us on the expert panel, only Rolf supported transplanting more wolves to Isle Royale, and he as the current wolf researcher there has more than a tiny conflict of interest in pushing for that option in order to perpetuate his research.

The issue of the Isle Royale wolves is very interesting and quite complex, but I’d like to offer the following reasons to support the non-intervention option and why we should let Isle Royale itself determine the fate of the wolves there.

1. New Wolf Pups Born in 2013.  The National Park Service reported earlier this summer that at least two and maybe three new wolf pups were born on Isle Royale in 2013, after none were born in 2012.  This breeding success reduces the need for a hasty decision, and eliminates one of the main arguments by transplantation promoters that the wolves are not reproducing.  The success with these new pups doesn't necessarily mean that the wolves are guaranteed long-term survival, but I think it does show that the wolf population is more resilient than the transplantation promoters believe.

3. Science Will Continue.  I certainly appreciate the extensive information and knowledge that have come from the classic predator-prey study on Isle Royale over the past half-century.  As Dave Mech pointed out in the June forum, the validity of that study will end if wolves are transplanted to Isle Royale now.  But other ecological studies will continue on Isle Royale to provide new scientific insights, whether the wolves survive or become extirpated.  Regardless of the outcome of the wolf population, continuing research can shed new light on questions of genetic variability in the context of island biogeography.  If wolves die out, how will the moose population respond?  Will genetic variability in moose also flatten over time?  Will the moose population revert to the boom-and-bust cycles of the 1920s to 1950, or will something else occur?  Will wolves naturally re-colonize Isle Royale on their own, even if the frequency of ice bridges to the Ontario mainland has declined with recent warmer winters?

4. Slippery Slope of Manipulation.  If we humans start transplanting wolves to Isle Royale, we start on a slippery slope that may have no end.  Additional wolves may be needed on the island after the first installment, to “freshen up” the gene pool yet again and again.  With a warming climate, Isle Royale may eventually lose its moose population, too.  Will we then import moose to Isle Royale in perpetuity to keep the imported wolves fed?  And, as Tim Cochrane pointed out in June, should we reintroduce the caribou and lynx that inhabited the island before the wolves and moose and lived there far longer?

5. Wilderness.  Congress has designated about 99% of the 132,018-acre Isle Royale as Wilderness.  The language and background of the 1964 Wilderness Act define Wilderness as “untrammeled” or unmanipulated.  This means that we allow Nature to call the shots, even if that might lead to extirpation of the wolves, either temporarily or permanently.  This is the very essence of Wilderness, that humans must treat Wilderness with humility and restraint and not manipulate Wilderness just because we can or think we know how to do so.  The writings of Wilderness Act author Howard Zahniser are full of these deeper values and meanings of Wilderness.

The current debate over the potential loss of wolves also indicates the fairly short-sighted approach of most land and wildlife management that is often based on the next 1-10 years, not centuries or millennia.  Because Wilderness is forever, we need to look beyond the short timeframe of human lifetimes and allow these natural processes to play out over much longer time spans, “to make it possible for those areas from the eternity of the past to exist on into the eternity of the future” as Zahniser once eloquently described it.  We should be “Guardians, Not Gardeners” as Zahniser urged us in another of his writings.  We should guard the natural processes on Isle Royale, even if they might lead to wolf extirpation, rather than garden the wilderness to become something more pleasing to our current human preferences and tastes.

The whole debate really comes down to this basic question:

Do we want a manipulated zoo at Isle Royale or a wild Wilderness?

That’s why we continue to urge the National Park Service to not intervene and manipulate the wolf population at Isle Royale by transplanting wolves from the mainland.

Kevin Proescholdt is conservation director for Wilderness Watch. Kevin guided canoe trips in Minnesota's million-acre Boundary Waters Canoe Area Wilderness (BWCAW) for 10 years, and has visited designated and undesignated Wildernesses throughout the U.S. and Canada. He helped pass the 1978 BWCA Wilderness Act through Congress, directed the Friends of the Boundary Waters Wilderness for 16 years, and co-authored the 1995 book, Troubled Waters: The Fight for the Boundary Waters Canoe Area Wilderness. For the eight years prior to joining the Wilderness Watch staff, Kevin directed the national Izaak Walton League's Wilderness and Public Lands Program. Kevin has been active with Wilderness Watch since 1989, joined the board of directors in 2003, and served two years as president of the board. He has written extensively on the Boundary Waters, and wilderness policy and history.
Tags:
Isle Royale Wilderness National Wilderness Preservation System reintroduction untrammeled wolves
Tweet
Recent Comments
Guest — Diane Brodak
One man I would not listen to is Dave Mech. Ask him what became of his beloved wolves when he was done with them. They were left ... Read More
Friday, 15 November 2013 12:00
Guest — Marilyn M Cooper
Without a top predator, isle Royale will live on all right, but it won't be a beautiful wilderness. I was in Yellowstone before th... Read More
Thursday, 14 November 2013 23:11
Guest — wildernesswatch
Thanks for your post, Marilyn. Wilderness is not supposed to be "beautiful" according to our current human tastes, but it is to b... Read More
Tuesday, 19 November 2013 07:38
Continue reading