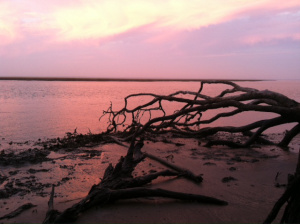 In February, the weather is usually perfect on Georgia’s coastal islands.  That’s one of the reasons why America’s  wealthiest men formed the exclusive Jekyll Island Club during the late 1800’s and turned that island into a Gilded Age playground.  Every winter they repaired to their “cottages” on Jekyll to hunt, fish, play golf and tennis, sail, and otherwise divert themselves. It’s rumored that poor Thomas Carnegie wanted to join the club, but because he and his brother Andrew came to this country as penniless teenagers from Scotland, they were supposedly turned away. Whether this story is true or not, in 1884 Thomas Carnegie purchased most of Cumberland Island, just south of Jekyll Island. He and his wife Lucy then proceeded to build a complex of lavish mansions there. Today, 17 mile-long Cumberland Island, larger than Manhattan Island, is a National Seashore, administered by the National Park Service. Along with places like Yellowstone and the Grand Canyon, it’s been designated a World Heritage Center by the United Nations for its unique natural beauty. Roughly the northern half of the island is a federally designated Wilderness.

Since Cumberland Island now belongs to the American public, who purchased it from the private owners, in early February of last year my wife and I decided to check on our property by making a three day-back-pack. It was her first visit to the island, and we especially wanted to visit Cumberland Island Wilderness, and also visit Carol Ruckdeschel, a renowned biologist who lives on the island. For decades, Carol has fiercely protected both the island and the endangered sea turtles who nest on its beaches every summer.  Carol is part of the fascinating history of Cumberland Island, and has been written about by a number of writers, including John McPhee. The most recent, and probably best account of her efforts to keep Cumberland wild, is Will Harlan’s book "Untamed: The Wildest Woman in America and the Fight for Cumberland Island," which was published by Grove Press this past May.

After spending the night in St. Marys, a sleepy fishing village on the southeast tip of Georgia’s coast, we boarded the early morning Park Service ferry for the 45 minute ride to the island. Pelicans and gulls flew overhead and dolphins played in the ferry’s bow wave. After a brief orientation at Sea Camp Ranger Station -- which used to be developer Charles Fraser’s headquarters when he had plans to turn the island into another Hilton Head -- we started walking north towards the Wilderness.  Along the way we passed near Greyfield, one of the mansions built as wedding gifts for Thomas and Lucy Carnegie’s children. Now it’s an inn run by some of the Carnegie descendants. 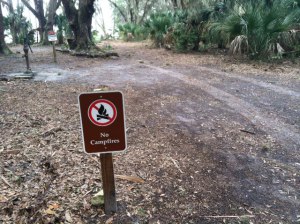 A little over a decade ago, on a backpack with friends,  I witnessed the Park Service driving a pickup truck through the wilderness area, and later saw a truck load of guests staying at Greyfield Inn being taken on a motorized commercial tour through the Wilderness. Soon thereafter, the Park Service, with the blessing of The Wilderness Society and National Parks Conservation Association, began conducting its own motorized visitor tours using 15-passsenger vans. When this was reported to Wilderness Watch’s founder Bill Worf, he was incredulous and came to Georgia himself to check it out. Later, in 2004, Wilderness Watch brought suit against the Park Service and won in the Eleventh Circuit U.S. Court of Appeals.  A three judge panel ruled unanimously that of course driving in Wilderness was illegal. Unfortunately, this victory was short-lived, as the local Republican Congressman, Jack Kingston, quietly tacked a rider onto an omnibus spending bill in Congress later that same year. His rider removed the unpaved single lane main road that runs the length of the island and also the entire beach from the Wilderness. This was the first time, and hopefully the last, that Wilderness had ever been removed from the National Wilderness Preservation System without public input.
Later that day, we passed another luxurious Carnegie mansion, Plum Orchard, which the Park Service has renovated at considerable expense for daily tours.  At 25,000 square feet with countless bedrooms, an indoor pool and squash court, a huge formal dining room, a “gun room” for the men, and an enormous staff of servants, it was a wedding gift to Thomas and Lucy’s son George, who enjoyed it only for a few months each year. Finally, we reached the wilderness boundary and spent our first night in Yankee Paradise, one of three designated wilderness camping areas.  The next day we hiked under huge live-oak trees dripping Spanish moss to our next campsite at Brickhill Bluff, which overlooks the marshes between the island and the mainland. After setting up our tent, we continued hiking to the north end of the island. This is a small area beyond the wilderness boundary shared by Carol’s modest cabin, the historic one room First African Baptist Church, established in 1893, and a private complex owned by the Candlers, heirs of the inventor of Coca-Cola. We spent a very pleasant afternoon sitting on Carol’s porch, marveling at the pet animals, including several buzzards, that live there with Carol, and talking about the challenges of keeping the island protected, which are explained in an excellent website that Carol writes, http://www.wildcumberland.org.
The next day we had a long hike back to the ranger station to catch the afternoon ferry, mainly walking on the beach, which is so long you can’t see from one end of it to the other due to the earth’s curvature.  We didn’t spot a single person until we reached the south end of the island!  This place, in my view, is the most beautiful and interesting place in Georgia. Cumberland gets into your blood, and it’s my hope to continue to visit the island at least once a year. 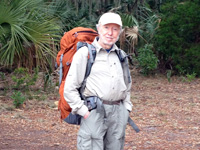 Jerome Walker's introduction to Wilderness Watch and Wilderness began when his late wife, Melissa, author of Living on Wilderness Time, served 10 years on WW's board, including a term as vice president. A retired neurologist who specialized in groundbreaking headache research and treatment, Jerome has concentrated on wilderness photography for the last two decades. He has photographed wild country from Alaska to Florida, traveling on foot and by canoe. Jerome's images have been displayed in galleries and currently are in private and corporate collections throughout the country. They have been used in books, newsletters, calendars and are on his website (jeromewalkerphotography.com). His time in Wilderness has led him to recognize its fragility and has motivated his work to protect it. He lives in Missoula, MT.
Tags:
Wilderness National Park Service Georgia Cumberland Island
Tweet
Continue reading