"The Wilderness Bill preserves for our posterity, for all time to come, 9 million acres of this vast continent in their original and unchanging beauty and wonder." -- President Lyndon B. Johnson, upon signing the Wilderness Act into law on September 3, 1964

50th Anniversary of the Wilderness Act 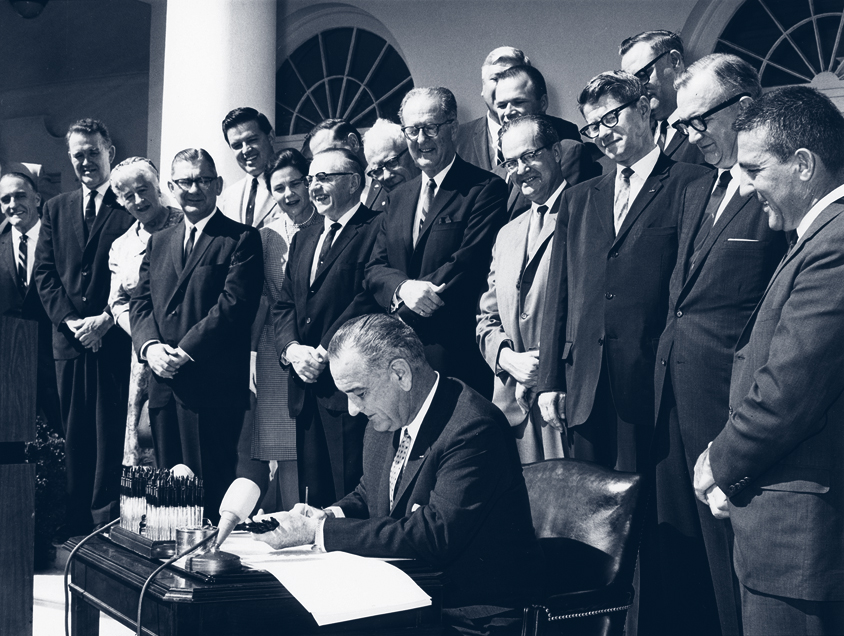 ifty years ago today, on September 3, 1964, President Lyndon Johnson signed the Wilderness Act into law at a Rose Garden signing ceremony.  This landmark law established the National Wilderness Preservation System, initially 54 Forest Service-administered areas that totaled 9.1 million acres.  The Wilderness Act also provided, for the first time ever, protections for Wildernesses in the federal statutes, with the goal that wilderness designation would be permanent protection.  The law, thanks to Howard Zahniser (the author of the Act), lyrically provided the legal definition of Wilderness, in part as “an area where the earth and its community of life are untrammeled by man, where man himself is a visitor who does not remain.”

So today we celebrate with deep pride and great gratitude the people, like our own Stewart "Brandy" Brandborg, who struggled to pass the Wilderness Act for the eight long years it took, and for all those across the country who have fought to protect other areas that are now part of our magnificent National Wilderness Preservation System, areas that will be, in the words of the Wilderness Act, “an enduring resource of wilderness” for all generations.

Photos:
TOP: On September 3, 1964, President Johnson signed the Wilderness Act into law.  Standing behind him are many of the Congressional sponsors of the law.  On the far right is Secretary of Interior Steward Udall. The 3rd  from the right in the front row, with the dark-rimmed glasses and dark hair, is Secretary of Agriculture Orville Freeman. Only two women stand in the group, Alice Zahniser with black hair and Mardy Murie with grey hair. The President gave to each of them the pens that he used in signing the Wilderness Act into law; the husbands of each of these women (Howard Zahniser and Olaus Murie) had worked hard to write and pass the Wilderness Act but had died before that day. Photo by Abbie Rowe, courtesy of National Park Service, Harper’s Ferry Center, Historic Graphic Collection.