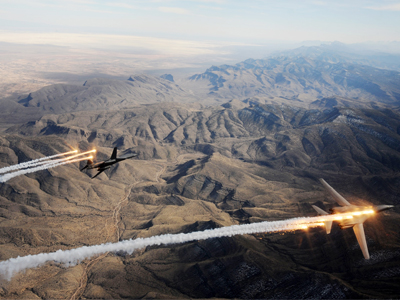 Due to public pressure, the U.S. Air Force in January 2021 dropped its proposal for up to 10,000 F-16 fighter jet “sorties” a year over America’s (and the world’s) first Wilderness—the Gila—and seven other Wildernesses in southern New Mexico—the Aldo Leopold, Apache Kid, Withington, Bosque del Apache, Sierra de las Uvas, Broad Canyon, and Robledo Wildernesses. The area’s wild character would have no doubt been harmed by the invasion and noise of these countless military overflights, including those just 100 feet above the ground.

Although the Air Force acknowledged that its current airspace is adequate, Holloman Air Force Base had proposed to expand its F-16 pilot training airspace over these Wilderness areas. Specially, the Air Force proposed an annual additional 10,000 flights, plus discharge of 15,000 flares and 15,000 bundles of chaff.

Flares allegedly burn out far above ground level, but there are documented cases of them being mistakenly released at low altitudes, reaching the ground and igniting fires. Meanwhile, chaff bundles contain up to 5 million aluminum-coated glass fibers up to two inches long, designed to stay airborne as long as possible and settle to the earth after several hours. Military studies on the effects of chaff on wildlife, humans, and water quality leave many questions unanswered. For example, does inhaled or ingested chaff harm wildlife? When chaff lands in rivers and streams, does it affect aquatic life and water quality?

Thousands of WW members and supporters urged the Air Force not to sacrifice these Wilderness areas, pointing out that supersonic jet noise would ruin the wilderness experience for visitors and stress native wildlife, dropped flares could ignite fires, and chaff trash could harm wildlife. We shouldn’t sacrifice America’s National Wilderness Preservation System—including the Gila Wilderness, the world’s first Wilderness area—when there are better places for this military training.