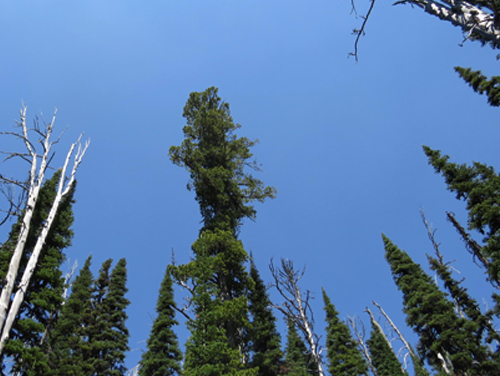 The U.S. Fish and Wildlife Service (FWS) is considering listing whitebark pine under the federal Endangered Species Act (ESA). Broadscale landscape manipulations proposed in the listing should not be allowed undermine Wilderness protection.

Our rapidly changing climate is having profound effects on species and habitat, and those effects are only going to accelerate unless we take drastic action, very quickly, to address the root causes of global warming. But rather than making the serious collective and political sacrifices necessary, we continue to layer bandages on the wound thinking we can intervene and mitigate and manipulate our way out of the consequences, which oftentimes results in more unintended consequences and more intervention and manipulation. Our well-founded alarm over the climate crisis is creating a new unintended consequence: Wilderness—as a place and a process and an idea—is in the crosshairs. The recognition that we can’t know everything, that there is immense value in observing how the land responds to the cards it is dealt, without our intervention, is more at risk than it has ever been.

The whitebark pine, a high-elevation pine found in forests throughout many Western states, is in trouble throughout its range. While its seeds serve as an important food source for grizzly bears, whitebark pine is threatened by a warming climate, increasing mountain pine beetle activity, and white pine blister rust. In response, the FWS's listing proposal contemplates various manipulations—such as agency-ignited fire, genetic selection and seedling planting, and the application of verbenone (a chemical used to control insects). About 29 percent of whitebark pine habitat is found within designated Wildernesses.

While we support strong protections for whitebark pine and its habitat, the listing rule for both the species and any critical habitat designated must be clear that interventions and manipulations are not appropriate in Wilderness. Wilderness must be protected as an important unmanipulated and untrammeled baseline and as a place for whitebark pine to make its own evolutionary move free from our fallible tinkerings.