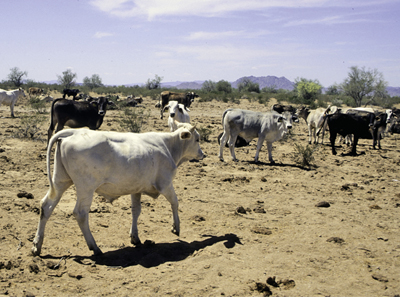 The Bureau of Land Management (BLM), which manages livestock grazing on 155 million acres of federal public lands in 11 western states, has proposed grazing regulation revisions that will have significant environmental impacts across the west.

The BLM’s proposed changes to livestock grazing regulations could affect nearly 5 million acres of Wilderness across the West, including the habitat for numerous imperiled species such as grizzly bear, Mexican gray wolves, desert tortoise, sage grouse and black-footed ferret.

Among the most concerning proposals:


Grazing can’t be allowed to further degrade Wilderness and should be constrained so that wilderness conditions can improve.

Photo: Cows and their damage in the North Mariposa Mountains Wilderness, Arizona, by George Wuerthner