Leave the Cascades and Olympic Wildernesses Be 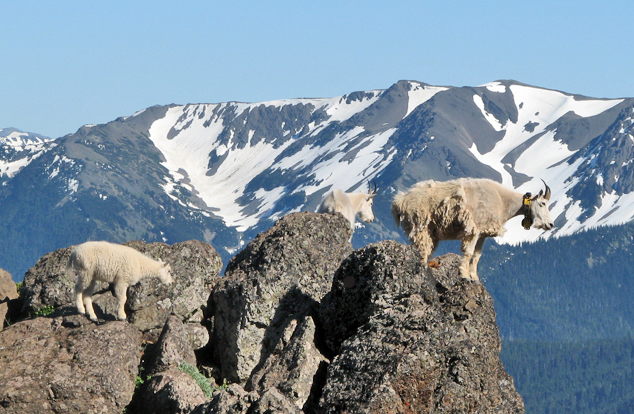 On August 27, 2018, Wilderness Watch submitted a formal Objection to the Forest Service on its draft Record of Decision Mountain Goat Management Plan/EIS for Olympic National Park and the Olympic Peninsula in Washington state. Our Objection was denied, and the agency, cooperating with the National Park Service, moved forward with plans to move a few hundred goats to Wildernesses in the Cascades (to augment populations there which have been overhunted but currently show some signs of rebounding), and eventually kill up to another 300 that can’t be caught. The Forest Service’s decision to go with the Alternative least-friendly to Wilderness—to land hundreds of helicopters in multiple Wildernesses and employ heavy-handed wildlife gunning, collaring, translocation, and manipulation—violates the Wilderness Act on multiple levels.

UPDATE: From September 2018 to November 2020, the NPS removed a total of 412 mountain goats, 325 of which were relocated to the Cascades. Details are available on the NPS site: https://www.nps.gov/olym/planyourvisit/mountain-goat-capture-and-translocation.htm

• Read our Objection.
• Read our Q&A: “What’s Wrong with Relocating/Killing Mountain Goats in the Olympic Wilderness in Washington State?”

The Park Service has decided to reduce or eliminate mountain goats via collaring and translocation or aerial and ground-based gunning in Olympic National Park and the Olympic Peninsula in Washington. The US Forest Service is a cooperating agency, and the project will significantly affect eight Wildernesses in the region. While the best evidence indicates goats are not native to the Park or the Olympic Peninsula—they were introduced there in the 1920s—the removal actions pose significant harm to the Wildernesses through intensive aerial intrusion and ongoing, heavy-handed wildlife manipulation.

The proposal calls for 500 helicopter landings in eight Wildernesses to pursue, capture, translocate, and kill goats with the assumption that more of these activities will be required in the future—though the impacts of those future activities are not disclosed or analyzed.

The stated goal of the project is to reduce or eliminate mountains goats on the Olympic Peninsula, mainly through helicopter aerial gunning or capture via helicopter for translocation to other Wildernesses. To accomplish this goal, the Park Service analyzed three alternatives:

• Capture as many goats as possible using helicopters and net gunning. This would involve landing in Wilderness, taking the goats out of the Park, collaring them, and then translocating them to Wildernesses in the Cascades to supplement native populations recovering from overhunting. It seems rather than strictly regulating hunting of goats in the Cascades, the agencies prefer supplementation.
• Kill the mountain goats, using helicopters for aerial gunning and for transporting ground gunners in Wilderness.
• Capture, collar, and relocate some mountain goats and kill others. This is a combination of the above two options and is the NPS/FS preferred alternative. It, like the other two options, would invade Wilderness with helicopters, subject the goats to intensive harassment and collaring, and require ongoing population manipulation in the future.

The agencies have no obligation under the Wilderness Act to remove nonnative species from Wilderness, particularly populations that have been established for nearly a century, especially when the removal actions themselves require significant, ongoing trammeling of Wilderness and intensive motorized intrusion.

At the very least, the agencies must explore methods that don’t require repeated helicopter pursuits and landings—something they have not done here. Similarly, it is not necessary to supplement overhunted goat populations in the Cascades when the agencies can take actions to reduce pressures on those populations without offending the Wilderness Act.