Nov 20 Posted by Super User in 1964 Wilderness Act
Wilderness: The Next 50 Years? 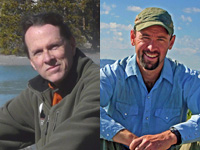