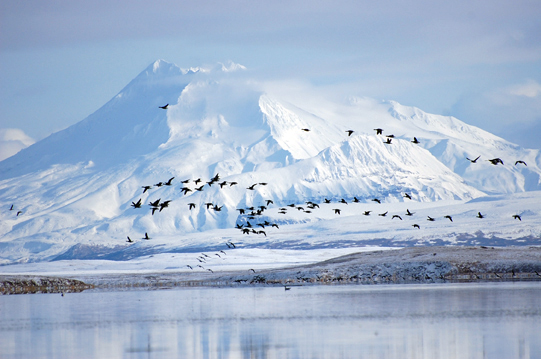 In 2020, a federal judge once again stopped the State of Alaska and the former Trump administration from bulldozing a road through the spectacular Izembek Wilderness in Alaska. In a June 1, 2020 decision, Senior Judge John Sedwick ruled against then-Interior Secretary David Bernhardt's closed-door agreement for a land exchange of federal public lands in the Izembek National Wildlife Refuge (NWR) and Wilderness that the State of Alaska needs in order to punch a road through this Wilderness. Wilderness Watch and co-plaintiffs filed a lawsuit on August 7, 2019, challenging this Agreement which then-Interior Secretary David Bernhardt signed in July 2019 with King Cove Corporation.

A road bisecting the internationally-renowned Izembek National Wildlife Refuge and Wilderness would be catastrophic and set a dangerous precedent for using land trade schemes to develop our precious Wilderness lands.

Located near the tip of the Alaska Peninsula in southwest Alaska, the Izembek National Wildlife Refuge and Wilderness is a remote stretch of land where a quarter-million migratory birds congregate each fall and where massive brown bears—as many as nine per mile—lumber through streams during peak summer salmon runs. Nearly 7,000 caribou make their annual trek into the Wilderness where they overwinter, and hundreds of sea otters swim with their young in the Izembek Lagoon, occasionally in the vicinity of migrating orcas, gray whales, and minke whales. Izembek is a hub of natural diversity, protected in large part because of its seclusion and lack of surrounding development. The road would cut through the largest eelgrass beds in the world as well as important grizzly, caribou, and salmon habitat. More than 95 percent of the 315,000-acre Izembek Refuge is designated Wilderness.

Commercial interests see this ecologically intact refuge as a barrier to commerce. King Cove, an Aleut town on the far side of the Wilderness that is home to foreign-owned Peter Pan Seafoods, has long pushed for a road to “link together two communities having one of the State’s premier fishing ports/harbors (including North America’s largest salmon cannery) in King Cove with one of the State’s premier airports at Cold Bay.”

Then-Interior Secretary Sally Jewell analyzed this proposal and issued a decision in 2013 prohibiting road construction due to “significant degradation of irreplaceable ecological resources” and because there are transportation alternatives for reaching King Cove.

Also, just before the Trump administration’s departure, the State of Alaska and outgoing Secretary Bernhardt unveiled yet another attempt to push the road through—the state submitted a road application to Interior under a new argument that the state is entitled to “access to inholdings” under the Alaska National Interest Lands Conservation Act. The U.S. Fish and Wildlife Service was on the verge of issuing the state special use permits to use helicopters to complete survey work for the road. Thanks to pressure from WW members and supporters in summer 2021, FWS decided to prohibit helicopter access and use, essentially stopping the surveys—the State of Alaska decided not to conduct the surveys at all with the helicopter access denied.

We may have lost this skirmish, but the battle to protect Izembek is far from over. It’s long past time for the Biden administration to stop pursing this Trump-era road and start defending the irreplaceable Izembek refuge and Wilderness as Congress intended and as Americans deserve.

The case is now remanded to the district court for further review. Trustees for Alaska represents Wilderness Watch and eight other groups in the lawsuit. Our fight to protect the Izembek Wilderness has waged since 2008, including two previous successful lawsuits.

Whatever the next chapter, Wilderness Watch will continue to defend this remarkable wild place. The voices of money and commerce always speak loudly. We’re here to make sure the interests of the caribou walking their ancient path across the Izembek isthmus are not lost in the chorus.

In 2009, Congress passed the Omnibus Public Land Management Act, which contained a provision by Senator Lisa Murkowski (AK) that mandated consideration of a proposed land exchange in the Izembek Wilderness and National Wildlife Refuge for lands owned by the State of Alaska and the King Cove Corporation. The exchange would enable construction of an 11-mile road through the heart of the Izembek Wilderness to connect King Cove with Cold Bay, Alaska. Beltway green groups that were pushing the Omnibus bill did not oppose the Murkowski amendment, which left the Wilderness’s future twisting in the Arctic wind.

In 2013, after NEPA review, then-Secretary Sally Jewel rejected the proposal noting that “construction of a road through the [] Refuge would lead to significant degradation of irreplaceable ecological resources….” Jewell's 2014 decision supported a February 2013 U.S. Fish and Wildlife Service (USFS) recommendation. The USFS's Final Environmental Impact Statement studied a proposed land exchange and a 20-mile road to be constructed through the Izembek Wilderness. The agency announced its preferred action to not approve the exchange and road.

King Cove, along with the State of Alaska, challenged the Secretary’s decision in Federal District Court, and Wilderness Watch and our allies intervened to support the Secretary’s decision. In 2014, the court dismissed most of the legal claims filed by King Cove and the state of Alaska asking to overturn the decision. In a September 2015 ruling, a U.S. District Court judge upheld Jewell’s decision to reject the proposed land exchange and road across the Izembek Wilderness.

This 2015 ruling was the last remaining claim to be resolved. The District Court found that the Secretary’s decision was well-reasoned considering the environmental impacts, and King Cove and the State of Alaska appealed to the Ninth Circuit. Just before oral arguments, and after full briefing, King Cove announced that it was withdrawing its appeal. This left the District Court’s opinion in place—a victory for the Izembek Wilderness—but we knew the fight was not over.

On July 20, 2017, the House of Representatives approved new land-exchange legislation that would trade off 206 acres of federally protected refuge and wilderness land for state land, stripping wilderness protection in the heart of the Refuge. Senator Murkowski introduced a companion bill in the Senate.

On January 22, 2018, former Interior Secretary Ryan Zinke signed a closed-door agreement for a land exchange of federal public lands in order to allow the State of Alaska to punch a road through the heart of this spectacular Wilderness. Zinke’s move was a clear violation of the Wilderness Act and the Alaska National Interest Lands Conservation Act (ANILCA), and was executed secretly without public involvement during the 2018 government shutdown. On January 31, 2018, Wilderness Watch and several co-plaintiff organizations, reprented by Trustees for Alaska, filed a lawsuit to stop the road. We secured a legal victory in March 2019, which the Trump Administration appealed briefly, but then dropped the appeal and moved ahead with its land exchange agreement signed in July 2019.

The issue was previously debated in the late 1990s when residents of King Cove and the Aleutians East Borough requested a road through the Wilderness, ostensibly for the health and safety of village residents who might need to reach the Cold Bay airport for medical evacuation to Anchorage. Alaska Senator Ted Stevens (remember the “bridges to nowhere”) attempted to insert a rider into legislation, which would have authorized construction of this road through the Wilderness.

The federal government has repeatedly studied and consistently rejected a proposed land swap and road through Izembek. Congress ultimately addressed the concerns of King Cove by passing the King Cove Health and Safety Act (Section 353) of the Omnibus Consolidated and Emergency Supplemental Appropriations Act of 1999 (Public Law 105-227). This law provided an appropriation of $37.5 million in federal funds for the Aleutians East Borough to construct a marine/road link between the communities of King Cove and Cold Bay that would utilize a hovercraft ferry, and avoid building a road through the Wilderness. It also funded improvements to the King Cove airport and village health clinic.

Proponents for the proposed road have claimed the hovercraft is too expensive and not feasible. The record, however, shows that in all instances of medical emergency since the hovercraft was available, patients were successfully transported to Cold Bay in a timely manner.